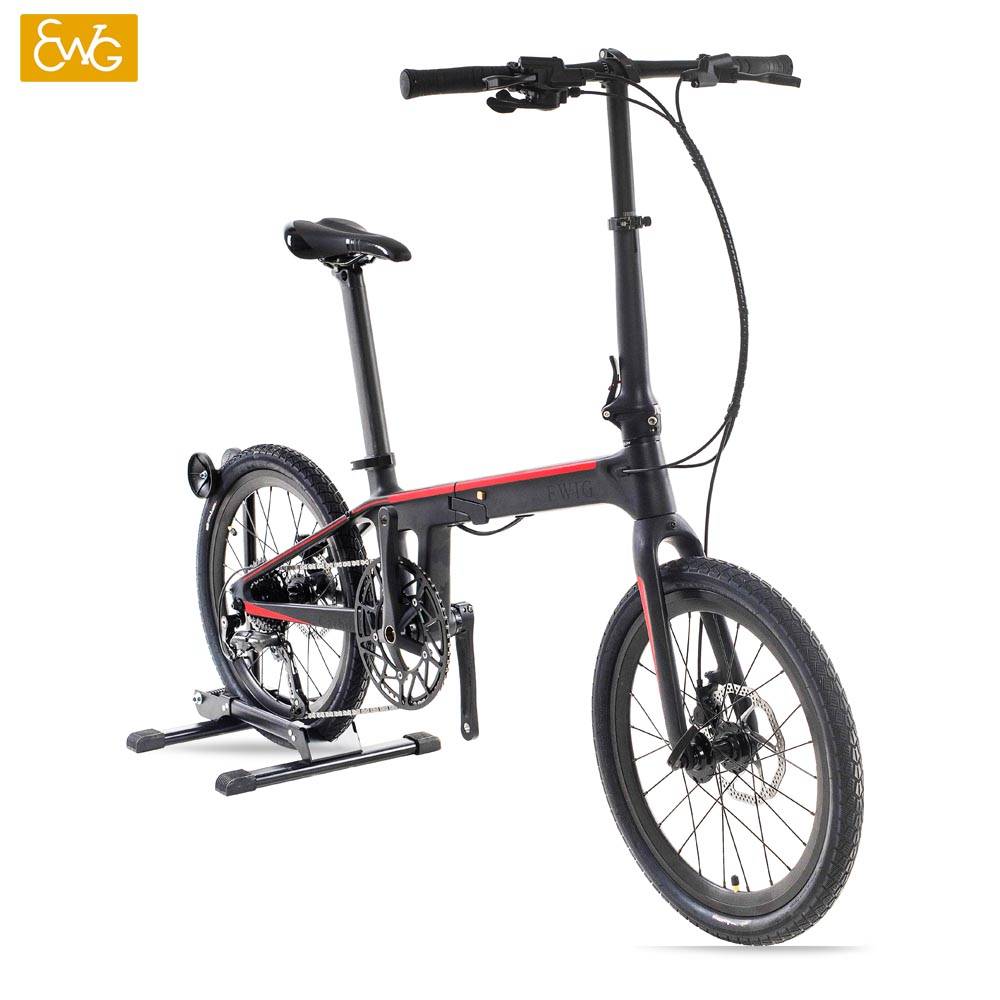 1.Our foldby one 9s carbon folding bike manufacture in China, with lightweight carbon fiber frame and fork ; folds in seconds and is easy to carry so you never need to leave it outside.

3. Foldby one 9s carbon fiber folding bike rides almost as well as the mountain bike and having gears in this folding bike is really nice and works well. Ourcarbon folding bike is an AMAZING bike.It is really surprised at the build and quality of the bike. It fell solid and secure, not like some other folding bikes that fell like they are going to fall apart under you.

The bike frame and fork are made of TORAY T700 carbon fiber. The weight is lighter than aluminum alloy and stronger than steel while taking into account toughness and corrosion resistance. Fold by one 9s is of good quality and is a great deal especially that it comes with mechanical disc brakes. The frame feels solid and it rides really nice. The Shimano derailleur is perfectly adjusted and shifted properly. The quality is amazing and at a good price.

The carbon fiber frame, the combination of TORAY T700 carbon folding bike frame and excellent technology, make it a sturdy and durable cruiser bike, bring you a safe and stable riding experience.

Carbon fiber folding bikes are made for even the smallest of storage spaces without tools. Take it with you when you go on vacation. For a trip to your office and park it right next to your chair, or store it at home next to the shoe rack without inconvenience. Quickly and easily folds for storage and transport; perfect for taking on a bus or train on your commute or stashing it in your apartment.

Easy to adjust, while only being 20 inch carbon folding bicycle is suitable for most people because you can easily adjust the height of the seat for your own needs. And it is easy to assemble, the portable carbon fiber folding bike is almost completely pre-assembled before packing and shipping. 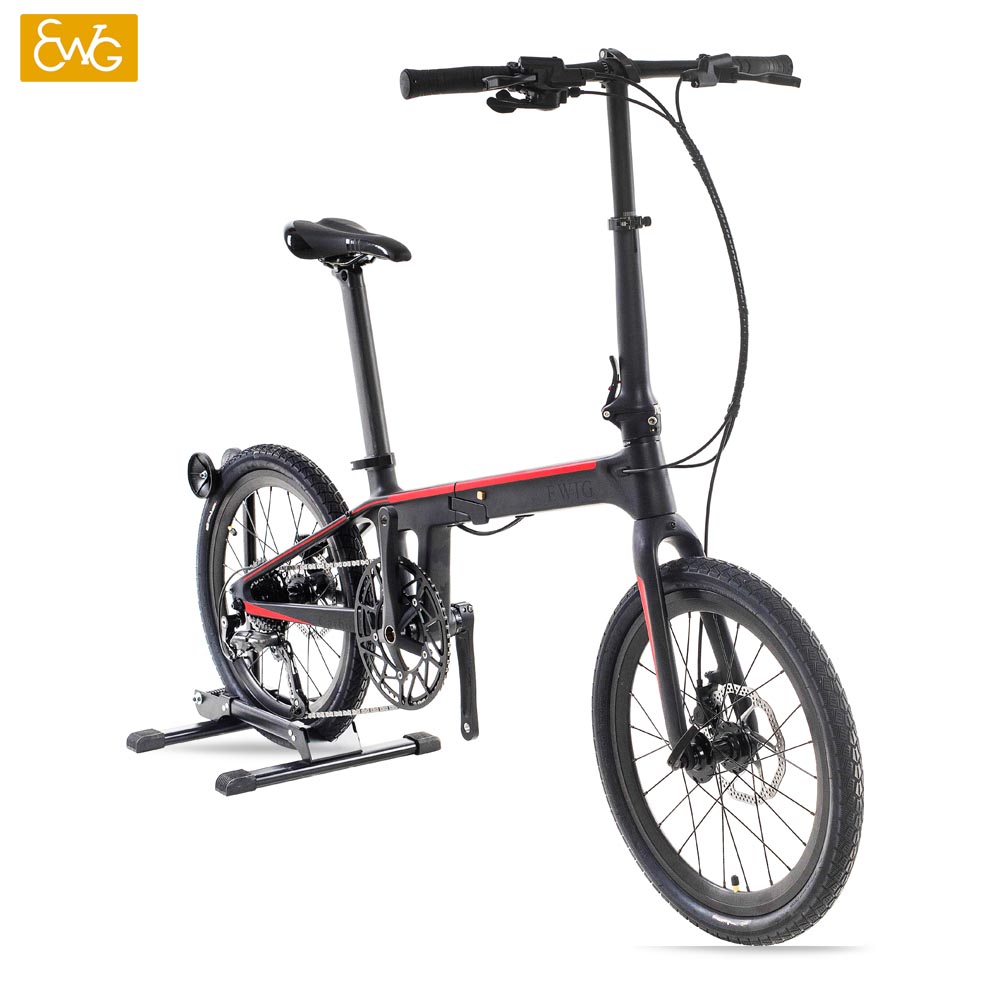 The SHIMANO M2000 is attractive and robust 9-speed component ever.

Our foldby one is pitched towards sports/fitness cyclists with a stylish and clean design.

The technology is mature,the ride is soft and responsive,the performance is stable,and doesnt react to extreme temperatures like heat,cold or shrink suitable for long-term use,safer on the road. 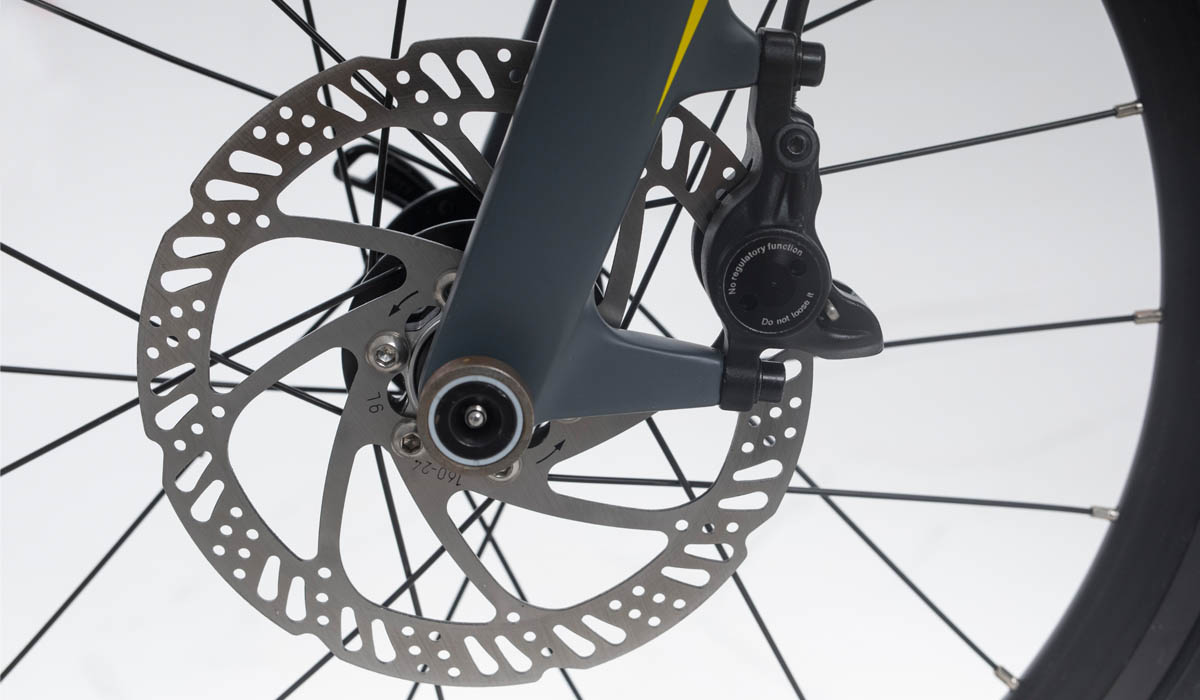 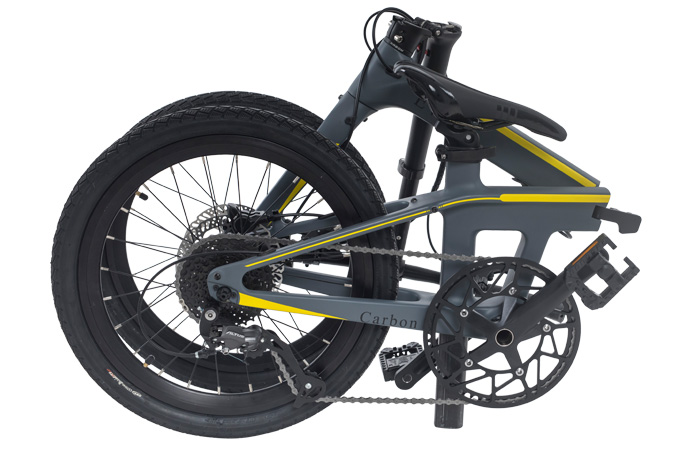 Large tire can roll over uneven surface with ease. Making you ride more safe and secure. 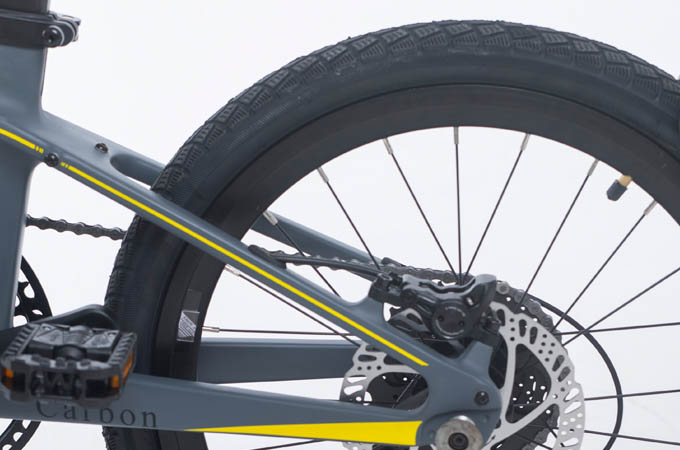 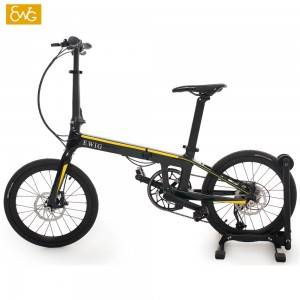 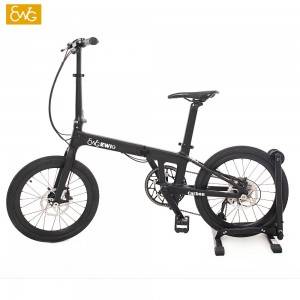 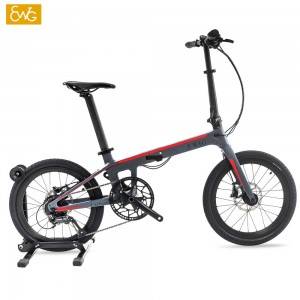 Are carbon bikes worth it?

When looking to purchase a new bike the question of choosing between carbon and aluminum/alloy frame pops up frequently. Some say it’s even better to buy a cheap carbon frame bike than an aluminum frame bike, while others insist that cheap carbon frame bikes aren’t worth your money and you should stick with metal in a tight budget.

Carbon being one of the most optimizable materials is used in some of the best bikes, Formula One and planes. It’s light, stiff, springy and stealthy.

The choice between aluminum and carbon is not so straight forward. Low-end bikes made using cheap carbon frames are not necessarily better than aluminum frame bikes. Just because a bike uses a carbon frame does not mean it’s as good as bikes that are optimized and use quality carbon. In fact, low-end carbon frames have some undesirable characteristics associated with them such as a wooden and dead feeling.

When looking for a new bike it’s important to turn your mind to the specifications and not just the words carbon. Don’t just assume because it uses the word carbon that it’s better.

In my personal observation, the main advantage to carbon for anyone who spends long hours on a bike is comfort. Carbon frames can be designed to be stiff, and yet, at the same time dampen out a lot of vibration thus making for a smoother and less fatiguing ride. Neither steel of aluminum offer that capability. Carbon can be light, stiff, and comfortable. Steel or aluminum can be light and comfortable but not stiff or they can be stiff and light but not comfortable. A stiff frame is important for the most efficient performance. A flexible frame sucks up energy that could be used to go farther and/or faster,

The disadvantages of carbon frames are cost and fragility. A ding that would lightly dent steel or aluminum can cause a catastrophic failure of carbon composite. but carbon does not corrode.

So, to answer the question, if you ride a lot, and can afford it, carbon is worth it. If your bike takes a beating, best stick to steel or aluminum. If you tour in remote areas where the only chance of frame repair, is welding, stick to steel.

What is the lightest folding bike?

Daily cycling will change your life for the better. It is not only the cheapest means of transportation but also provides benefits in health and quality of life.

We all know that but it seems impossible to many people. You can have many excuses for not biking to work, for instance, you don’t have a safe spot to park your bicycle or you don’t want to get sweaty and ruin your nice clothes.

All those concerns can be solved now with a folding bike. You can choose a mixed-mode commute by combining bicycle use with public transportation, and then put the folder under your desk when you arrive at work. A lightweight folding bike will be extremely helpful in this case because you will be able to carry your bike onto the bus or to subway train effortlessly. Here we are presenting a list of the lightest folding bicycles available on the market to make your commute easier.

Our EWIG foldby one 9s is very popular and good selling in SG and UK. and with its all-round performance, it’s clear to see why.The frame and fork are made fromToray T700 carbon fiber.The 20in wheels and V-brakes may be of no particular brand, but the Ewig foldby one 9 s gets an 9-speed Shimano Altus drivetrain, a great reliable and durable brand, and a great find at this price point. It’s one of the best folding bikes on the market as it does tick all the boxes of what to look for in a folder, but they’re just rather small ticks. In order to reach this competitive price point, you are making compromises all around, with non of the Ewig foldby one 9 s features really excelling. It’s not particularly exciting, thrilling, or stands out from the crowd beautiful. It just does what it says, and sometimes that’s all we really want.

Of course, portability is a chief benefit of a folding bike. You can carry one onto trains without having to look for special bike carriages.

As well as being easy to carry, folding bikes are cheap to transport since they’re usually accepted as hand luggage.

Even on an intercity or international trains, where full-sized bikes attract an extra charge, you will not typically have to pay extra to bring a foldable bike with you.

Road bikes, hybrid bikes and MTBs all pose storage challenges to cyclists, who don’t always have the space or desire to keep them indoors.No such problems exist with a foldable bike, which takes up minimal space in a cupboard, under your bed, under a desk or under the stairs.A bike you can carry to more places with less expense can only be environmentally friendly. It’ll save you from taking the car, in many instances, providing you have the inclination to cycle.As the world becomes more eco-conscious, the foldable bike has a greater role to play than ever before.A bike that encourages you to ride more can only be good for your health, even if it’s not designed for epic adventures. A small amount of exercise every day still has a cumulative effect, even if you do nothing heroic on the bike. So I think folding bikes are good.

Are carbon Hardtails worth it?

Riding a hardtail is harder, it’s rougher, it’s less comfortable, but it forces the rider to ride at a speed more appropriate to their skill level. Without rear suspension to smooth out the bumps it teaches riders to ride smoother and use their legs as suspension — as everyone should when riding any bike, not just a hardtail. Riding a hardtail teaches line choice, because choosing the wrong line hurts. It teaches mechanical sympathy because you can tell when you’re smashing your wheels about. It teaches how to bunnyhop properly without using the rear suspension to help. All of these skills are fundamental to riding, and by jumping straight on a full-suspension bike, people are robbing themselves of those skills. Ride a hardtail first and put the time in, you’ll learn to love it and it will benefit you greatly in the long run. The first time you ride a full-suspension bike will be incredible.

With no messy linkage to collect mud, hardtails are also much easier to clean, and typically cabling is less messy and considerably easier to replace. Hardtails are sturdy machines, and this makes them ideally suited to the rigors of winter riding. You can ride in any weather and spend a lot less time working on your bike. Just go for a muddy ride, hose your bike down, lube the chain and you’re good to go for next time.

When you do need to carry out a bit of maintenance, it’s usually easier because there’s less going on, and if you crack or snap your frame, you can simply weld it back up again if it’s made from steel.

Who makes the lightest folding bike?

The lightest folding bike around right now is the EWIG foldby 9s, weighing in at just 8.1kg.

While folding bikes aren’t known for being particularly elegant, EWIG has done a great job in designing a sleek and futuristic bike that performs as good as it looks.

Importantly, this super light folding bike is also extremely easy to fold up and down – with EWIG saying practiced users can complete the process in just 10 seconds.

Despite being the lightest foldable bike on the market as of 2021, the EWIG foldby 9s is also impressively robust, has 9 gears to make hills manageable, and has powerful Tektro HD-M290 hydraulic disc brakes.

If you can afford the USD660 price, the EWIG foldby 9s is a lightweight folding bike to behold.

How much do foldable bikes weigh?

One thing you need to consider before buying a folding bike is its weight. A bike’s weight generally influences your cycling speed and acceleration, especially when going downhills or uphills. Moreover, the average weight of folding bikes is about 28 lbs. but others can go lighter (about 15 lbs.) or heavier (about 36 lbs.).

Yet, it’s important to note that several components affect a bike’s weight, including the frame material and tire size. So, if you ever want to get a light or heavy folding bike, consider targeting these areas when buying one.

A slight change in weight makes a significant difference in your cycling performance. As a bike commuter, you don’t want to fold and lift a folding bike that’s too heavy to lift.

What are the disadvantages of a folding bike?

Because it needs to be folded, it does not have a complete mechanical structure, and its rigidity as a sports car is insufficient. The specific performance is that the car is not very smooth when cranking the car.

Because the wheel diameter is small, the passing ability is relatively weak, and the slightly larger potholes will feel unstable, and the wheels can easily get stuck on obstacles, so it is only suitable for paving the road outside the city.

Because it needs to be folded, there are many more structures and related reinforcements needed for folding, so that the weight is not dominant, and the versatility of the parts is poor, and the cost of the small wheel diameter wheel set is still relatively high.